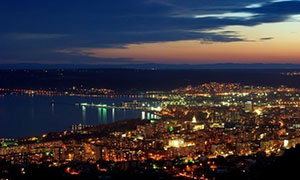 Varna (situated at a distance of 400 km from Sofia) is Bulgaria’s Black Sea capital. Built along the Black Sea Coast, it boasts more than 20 km of sand beaches and abounds in thermal mineral water springs;

The town of Balchik is only 40 km from Varna and hosts a fascinating botanical garden and the castle of Queen’s Maria of Romania.
The Euxinograde Residence, a former late 19th- century Bulgarian royal summer palace and park on the Black Sea coast at a distance of kilometres (5.0 mi) to the north of central Varna, is often considered to be one of the finest examples of post-Liberation architecture in Bulgaria. The park spans an area of more than 5.5 ha and is home to over 310 plant species from the whole world;
The Aladzha rock monastery (17 km from Varna) is one of the best preserved and most visited rock monasteries in Bulgaria. Located in a picturesque area and carved out in the limestone cliffs, the monastery is part of a large religious complex.

"I would like to assure you that the team of Bulgarian School of Politics is very impressed by the professional services of Event Design. They organized several important international conferences for us, at which high ranking guests were present, and not only us but also our partners form the Council of Europe were very fond of the quality of the services provided."
Svetlana Lomeva
Director
Bulgarian School of Politics, 2008