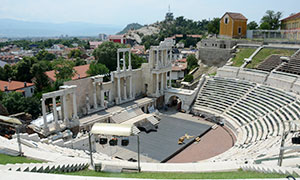 Plovdiv, the second biggest town in Bulgaria, is one of the oldest cities in Europe – its history dates back to 4000 years BC.

Old Plovdiv is a living museum of the Bulgarian Renaissance period where visitors enjoy relaxing strolls along the steep cobbled lanes, lovely houses with large bay windows and slender columns, latticed eaves and heavy oak gates, quiet green yards and rippling marble fountains. Every house here has its own style and ambience.

Plovdiv’s magnificent second century AD amphitheatre, built by Emperor Trajan, is one of the best preserved ancient theatres in the world. The famous ethnographic museum houses some 40 000 exhibits, including traditional costumes and musical instruments, jewellery and traditional craftwork like weaving, metalworking, winemaking and beekeeping.

Traditional tools displayed range from grape-crushers and wine-measures to apparatuses used for distilling attar of roses.

Plovdiv area is one of the most developed wine regions in Bulgaria famous for its red wines: Cabernet Sauvignon, Merlot, and Mavrud.

“I would highly recommend Event Design as a company that deals with its work on a professional level, meeting all requirements, paying special attention to the contractor’s needs. The team was dedicated to achieving all goals of the project and made it possible for the educational trip to be accomplished successfully.”
Lozan Panov
Administrative Court Sofia, 2009