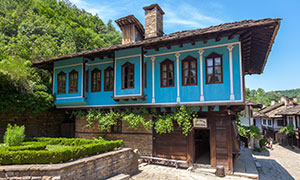 Set on the crossroad between Europe and Asia, Bulgaria is a rapidly emerging destination that not only offers a superb and diverse product in terms of holidays, meeting and incentives planners, but also exceptional experience for nature lovers, sports enthusiasts and visitors interested in the cultural setting.

Feel the fragrance of roses. Listen to the bagpipe players in Rhodope Mountains. Taste the famous Bulgarian yoghurt and green cheese.

Welcome to a land of vineyards, abounding in a myriad of quaint local traditions.

We will take you on a fascinating journey around Bulgaria that will exceed your expectations – an experience so rich that you will wish to go again...
and again.

Climate: moderate and agreeable with four distinct seasons – a beautiful, mild spring when nature bursts into full bloom, a dry and hot summer, a typically long and pleasant autumn, and relatively mild winters with lots of opportunities for skiing.

Customs regulations:
For EU citizens, the regulations applicable in the rest of the European Union apply. Travellers from non- European countries require a valid passport (visa may be required for some countries). They may import only: customs-free personal travel goods such as those needed on a temporary basis for personal use or consumption or for the exercise of their profession.
For more information: http://www.mfa.bg/en/pages/109/index.html

“The team of Event Design had made all necessary travel arrangements with meticulous attention to the minutest detail, including finding and booking a hotel and coordinating the study tour agenda. As a result of the excellent organisation, all participants in the study tours expressed their satisfaction and warm appreciation.”
Supreme Administrative Court

“We recommend Event Design as a company, which has accomplished all undertaken engagements professionally with care for the contactors interests, which makes the company a reliable partner.”
Angel Antonov
Senior Commissioner
Project Manager and Director
of Criminal Police
Ministry of Interior 2009